Socrates – Father Of Teaching And Still Pointing The Way 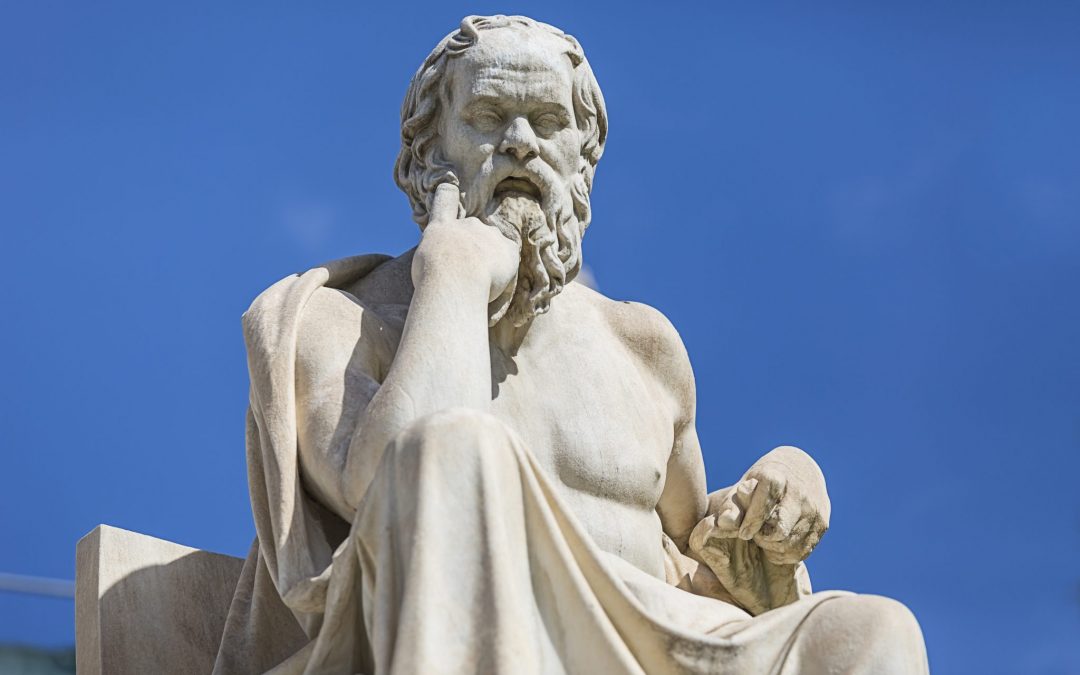 We have all heard the term Socratic Inquiry. But what does it mean, and why is it still relevant today?

I think it is safe to assume that answers to these two questions only matter to those who are convinced that teaching and learning are important, which is just about everybody, so let me explain.

To begin, we learn in two different ways. The Greek names for these two styles are

In the didactic scenario a person, a book, or more recently a machine pushes facts at us, and testing is deployed to find out how successful that process has been.

In the maieutic scenario opinions are pulled from us, primarily through the use of judicious questioning. Testing how successful this has been is difficult because we are dealing in the realm of subjective opinions, and opinions are only validated sometime after the fact.

The didactic scenario is important of course because we are not born with all the facts we need to function in civil society. The didactic scenario is also important in school and beyond since we test so much and in a career. If a person is not up-to-date on the facts required to pass a test or do their job, then the individual and the company will suffer the consequences.

The reality, however, is that most employees are paid to make decisions about subjective, equivocal or ambiguous issues with no right or wrong answer; and the higher up the hierarchy the more this is true. Facts play an important role in making decisions on subjective issues, but only when synthesized with new information – uncovered by questioning – and explained clearly.

If an organization wishes to push decision-making down the organization – thus flattening the structure and making it more nimble – then what Socrates called “Intellectual Midwifery” needs to be encouraged and taught. He believed that this is best accomplished in a group with a skilled leader, who is a guide on the side not a sage on the stage. If a school wishes to teach decision-making, problem-solving, critical thinking and teamwork it needs to do the same.

Michael Michalko, a highly acclaimed expert on creativity, has noted that, “Einstein and others discovered and used an ancient set of Greek principles of intragroup communication, which was developed by Socrates. Socrates and other Greek philosophers would sit around brainstorming and debating various issues. Their discussions rarely get out of hand….the participants were bound by seven princples….to maintain a sense of collegiality. Socrates called these principles Koinonia – a spirit of fellowship.”

These seven principle are:

By looking at these principles you can understand why Socrates defined his philosophy in this famous quote, “I cannot teach anybody anything, I can only make them think.” Isn’t that still the job of instructors, coaches, mentors and teachers – and schools?

Collaborative problem-solving transfers more responsibility to team members, yet provides them with peer support and hopefully support from the principal, curriculum designers and the school superintendent. Not only will a better decision be made if a group addresses the problem rigorously but many other benefits accrue. Collaborative problem-solving hones the arts of persuasion, listening, leadership, social conduct, tolerance of other opinions, ambiguity and the softest skill of all: being able to hold another’s opinion in one’s mind without necessarily agreeing with it. A skill, Aristotle said, that “made us human.”

Maieutic learning – critical thinking in a group focusing on the correct problem with the outcome being an agreed upon solution – is unfamiliar territory in most classrooms. But it is becoming more important in companies as they understand the need and desire for nimbleness in this hyper-connected, ever-changing, data-rich environment.

Understanding how to work in teams will not only pay dividends, but will create a culture of continuous innovation; the surest path to evolution.

When I designed my Terego Training Method© I had three primary design criteria. It is Socratic Inquiry, Version 21st century