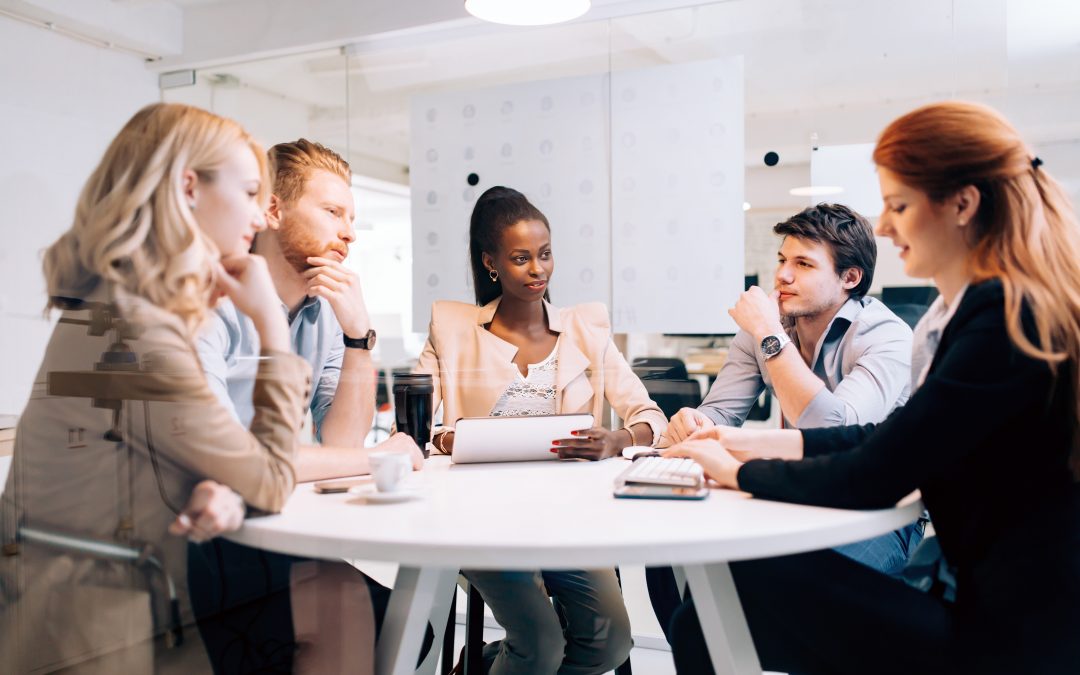 Productive Teamwork Depends on an Appreciation of the Difference Between Dialog and Discussion by ALL Team Members.

A quick review of the difference between dialog and discussion should be a precursor to any and all meetings. I have been known to use posters to reinforce the distinction.

DIALOG: The discipline of team learning starts with ‘dialog,’ which is defined as the capacity of members of a team to table or suspend assumptions as ideas are floated, and enter into a genuine “thinking together.”

But the discipline of dialog also involves learning how to recognize those patterns of interaction in teams that undermine learning. Patterns of defensiveness are often deeply ingrained in how a team operates. If unrecognized, they undermine outcomes. If recognized and addressed creatively, they can accelerate better outcomes. So, think together.

DISCUSSION: This takes place when various views are presented and a discussion takes place in a search for the best solution. Ideas are proposed, defended and attacked. At this stage there are no bad ideas. So, share ideas.

Dialog and Discussion are the two distinct ways that members of a team critically think, converse, debate, problem-solve and achieve consensus. This is how they differ.

In this discussion you could begin by identifying three necessary conditions for successful dialog and discussion:

What usually happens next is that participants gradually begin to recognize that they can either begin to defend their points of view, finding others as somewhat or totally wrong; or begin to suspend their view, and start to listen without coming to a hard and fast conclusion too soon about the validity of any of the views yet expressed.

As they caucus, they become willing to loosen the “grip of certainty” about all views, including their own. This ability to hold another’s viewpoint in our mind without agreeing or disagreeing with it is the equivalent of magic, and must be encouraged and used. It is the primary source of enlightened and innovative thinking. Aristotle thought that this capacity was what differentiated humans from the rest of the world.

What happens next can be viewed as a problem or opportunity.

Many participants will find themselves feeling frustrated as the underlying fragmentation and incoherence in everyone’s thought begins to appear.

Extreme views become stated and defended. Please note that all of this heat and instability is exactly what should be occurring. The fragmentation that has been hidden is surfacing in the group interactions.

What follows may sound like psycho-babble, but it really helps to ask and answer these questions, and team members should be encouraged to ask themselves:

Team members will notice that they differ in their pace and timing of speaking and thinking, and begin to understand and respect this aspect of team collaboration.

Sometimes the flow takes on a powerful and undeniable intensity. It is here that a reminder comes in handy: dialog is an exploration or floating of ideas; discussion is a probing and testing of those ideas.

Inquiry within this phase of the group interactions is subtle; people here can become sensitive to their cultural norms; ways of acting and thinking they assume must be true because they are their only point of reference. Acting as a group teaches tolerance and understanding – and leverages diversity of background and skill.

Dialog and discussion phases can lead to another crisis. People gradually realize that deeper themes exist, behind the flow of ideas. They come to understand and, most importantly, feel the impact that holding fragmented ways of thinking has had on them. They sense their separateness. While people may understand intellectually that they have limits to their vision, they may not yet have experienced the resulting isolation resulting from their views. Such awareness brings pain; both from loss of comforting beliefs and from the exercise of new cognitive and emotional muscles. People recognize that their thoughts, in the form of collective assumptions and choices, create and sustain fragmentation and separation.

Moving through this crisis is by no means a given, nor is it necessary for ‘success’ in dialog. Groups will develop the capacity for moving to the final level of dialog over a considerable period of time. It is a deep and challenging effort, one that requires considerable discipline and collective trust.

If this crisis can be navigated, a new level of awareness opens. Participants begin to know consciously that they are participating in a pool of common meaning because they have sufficiently explored each other’s views. They still may not agree, but their thinking takes on an entirely different rhythm and pace. This too may be unfamiliar and disorienting. People may find that they do not have adequate words and fall silent. This silence must be seen by the leader of the Enterprise Team and the rest of the team for what it really is; not an empty void, but a thoughtful pause.

Dialog is an exploration or Ideation; Discussion is a probing and testing of those ideas, and together they fuel the team’s purpose: an exercise called KNOWLEDGE MINING.

My Terego Enterprise Training Method is designed to show teams how, through persistent questioning, they can seek knowledge by