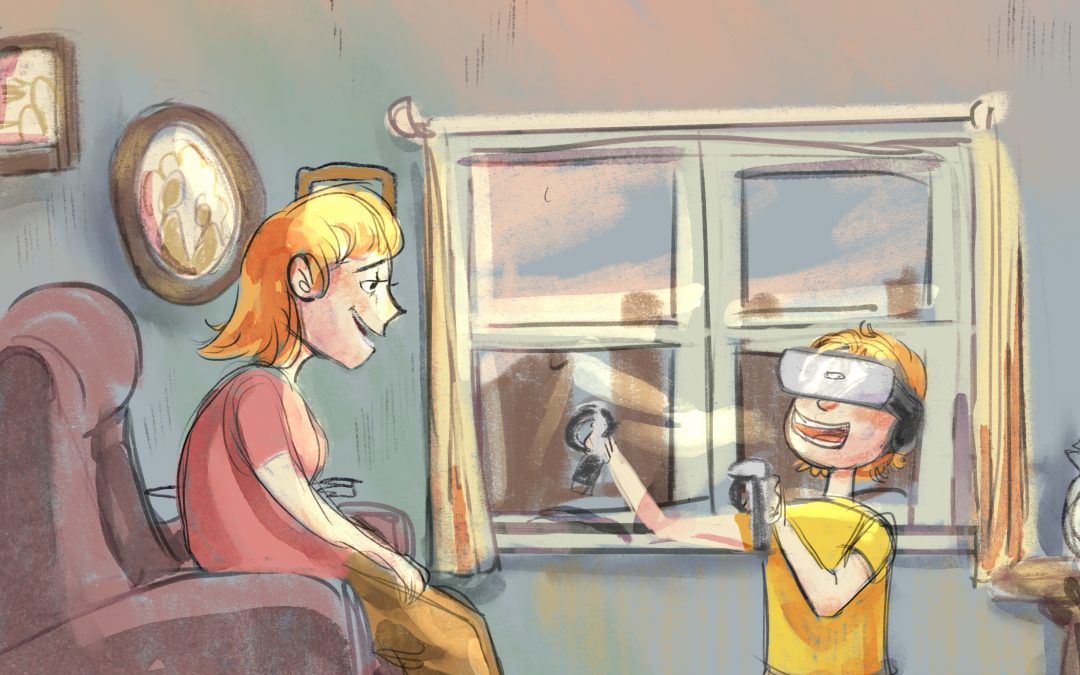 “The metaverse is going to be far more pervasive and powerful than anything else.” Tim Sweeney, CEO, Epic Games.

When a child looks into the eyes of another a person looks back at them. And two-way communication takes place. When they look into a VR headset, who looks back into their eyes? And what happens to interactive dialog? This is new to our species. How do we prepare children for this?

Even in a movie theater wearing 3D glasses, one is still aware of the 2D screen and the other people in the theatre. In this new virtual reality, all children will actually see will be the backside of their cornea. This could be very isolating, especially if there are game or entertainment elements, which there will be.

In Jaron Lanier’s 2017 book, Dawn of the New Everything, this VR pioneer asks a very pertinent question of virtual reality, “Who is it who is suspended in nothing, experiencing these events?” His answer is unsettling, “It is you, but not exactly.” He is implying that our contact with the Metaverse and Virtual Reality is surreal.

If a child is looking through a VR headset, who are they seeing? Who is looking back? Their own eyes if they wish of course, and the eyes of real people they invite. But what happens if the Metaverse takes over the role of looking back, or being a companion, or mentor? What happens when children, who naturally put themselves at the center of whatever mise en scène they build – or someone or something builds for them – and they see a forgery of themselves that is not reality but an illusion?

The trouble will be further compounded if they want a better version. And they will, because by nature we are never satisfied. If the tools offered to children facilitate computer generated imaging (CGI) – and they will – the child will always try for ‘improvement’ and render an ever more idealized or better, but still unreal, version of their self. Keeping themselves center stage; the same person but not exactly. Cocooned.

The moment may arrive when the creator is overcome by her creation. In effect, children in a hyperreal situation are only looking into a mirror, and education is supposed to make mirrors into windows not keep them Narcissus-like, anxiously fixated on their own persona. Parents don’t want that. The Metaverse does.

I do not know at what age your child should be told, but she should be told at some point, that the major difference between digital reality and physical reality is that digital reality has been programmed by humans, so far anyway. And because it has been coded, a hacker could break into the programmable hyperreality a child is experiencing and change it without the child knowing until they are even further confused. And if a child is living mostly in a hyperreality, their perceived reality will be changed to suit the goals of the hacker, not the goals of a child or the original developer. And the hacker could easily be the Metaverse platform itself. On the other hand, the child’s real world is very tough to hack.

25 years ago, Nicholas Negroponte the founder of MIT’s Media Labs called what was coming Continuous or Ubiquitous Computing. People at the time were dubious of his claim. In fact, just a few years after his claim, technology vendors had achieved it. And life changed, especially for digital natives.

Now the goal of the Metaverse or Hyperreality is Saturated Computing. This too will be achieved, probably in record time also. There is too much money to be made. And in a decade or so the advent of Quantum Computing, Quantum Communications and implantable sensors will make today’s binary smartphone and internet look like an abacus computing results and sending them via the Post Office. The Turing Test will be a historical footnote.

Fortunately, all of us are equipped from birth with all the skills necessary to cope with what is coming. They are our Hybrid Skills. And your job, if I may be so bold, is to be a good ancestor and help children polish them. Help them think things through thoroughly – guaranteed.