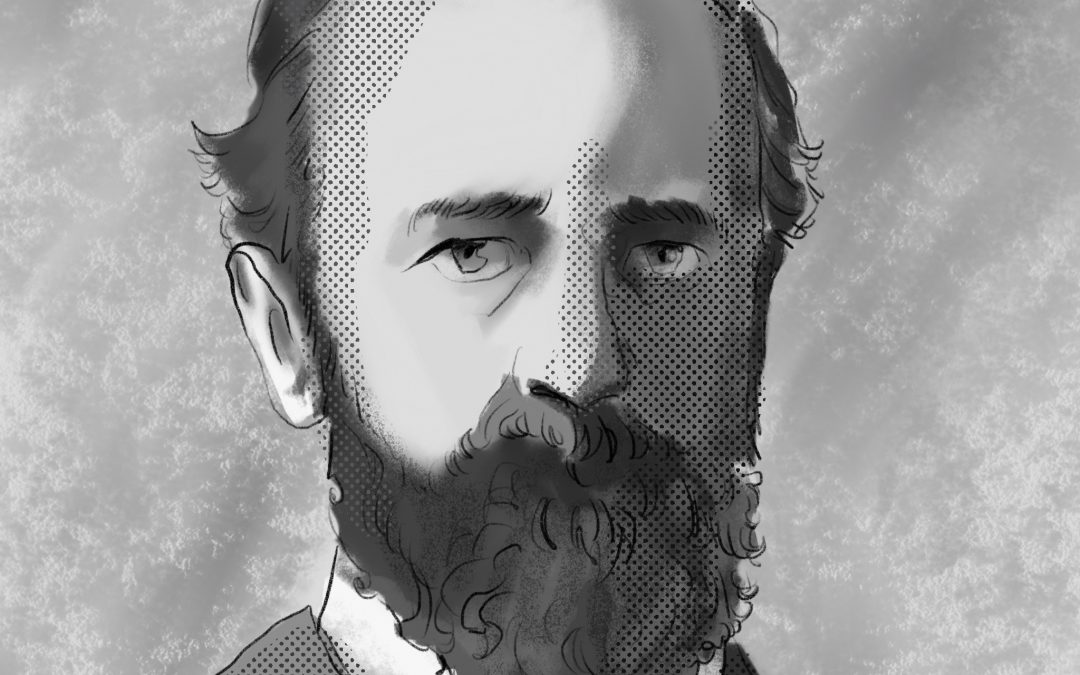 William was the elder brother of novelist Henry James and Alice James the diarist. The family’s wealth allowed the siblings to pursue a life of the mind. William graduated from Harvard Medical School but never practiced. He was drawn to philosophy and through philosophy he became drawn to psychology and is now known as American psychology’s founding father.

Between 1892 and 1899, James delivered a number Talks to Teachers, which constitute his most important contributions to educational theory.

His overriding objective in these talks was to help teachers understand and empathize with the mental life of a pupil so that the teacher can engage in “active unity” with the child as they approach “learning-together” as a joint undertaking. This was the opposite of the textbook training he found so repugnant.

The individual talks also dealt with such matters as psychology, the teaching art, the stream of consciousness, the child as a behaving organism, education, behavior, native and acquired reactions, habit, association of ideas, attention, memory, acquisition of ideas, perception, will, and other related topics.

He defined stream of consciousness as, “consciousness as an uninterrupted flow, a river or a stream.” To be a conscious, sentient being means that mental activity is an unceasing movement. This movement of our consciousness is our way of dealing with our subjective life. Constantly using existing knowledge and new data to sculpt our ideas into a comprehensible whole.

His advice was to consider the pupil as an active being, not merely a mind to be filled. The child is a complex and maturing organism, he believed, and the mind is just one feature. And the mind is not a receptacle. It is an agent with interests, drives, powers, resistances, and peculiarities which together defines a unique person. One contemporary commentator remarked that, “Nothing can be imagined farther removed from this idea than a machine built to a pattern and responding passively to external prods and prizes.” This latter being the view held by the Behaviorist school of educational theory.

He taught that to reach and teach children’s minds a teacher must multiply the number and kinds of cues or learning opportunities because that will bring the child to full consciousness; and that is all children’s goal. Commentators have said this is not so much a method but a call to exert the imagination.

In effect, James was describing what later came to be called the field theory of thought. A precursor to Gestalt theory, it examines patterns of interaction between the individual and the totality of their field – or environment; physical, emotional, physical, and cognitive. Holistic.

Any teacher starts with the pupil as a “lively bouncing creature in which the body and its needs predominate.” But the child is also, “mentally curious, and this a sign that mind is present also.” But during early childhood, James wrote in 1899, “the native interests of children lie altogether in the sphere of sensation.” A theme echoed by Freud, Montessori, and Piaget. Hence James recommends that until what he called “artificial interests” develop, children should be taught through objects, things that move, events of dramatic quality, anecdotes in place of propositions, and stories. James strongly favors letting the child handle the means of instruction, “Build, take apart, try out, do. Repeat.”

James’s commonsense view that instruction should begin by exploiting native skills and interests, made him an inspiration for John Dewey and the Chicago School. They both identified play as a key skill children possess and proposed that its value lies in the fact that play is the “germ of trial and error, and trial and error is the germ of experimentation.” They concluded that the mind is forever facing problems and seeking solutions and needs attention. Teaching therefore is the art of devising situations that will challenge the problem-solving mind and build up in its “child-owner a stronger capacity to ascertain, verify, and solve.”

To James, this meant that good teaching cannot follow a set form; it is not the curing of a weakness, such as the replacement of unreason by reason and superstition by science. Rather, it is the interaction of a practiced, well-filled mind with another which is practicing to be well-filled. The contents of any mind at any moment – what James first called the stream of consciousness – is an ever-flowing rush of objects, feelings, and impulsive tendencies. The art of teaching consists in helping to develop in the child the power to control this stream, to sort out its objects, classify their kinds, observe their relationships, and then multiply their significant associations.

James was not alone. In Europe, the Kindergarten Movement, Montessori, and other school reforms and the introduction of preschool instruction were in full swing even before James.

140 years earlier than James, J.J. Rousseau made the identical point about the value for education of having the naturally restless child learn by playing, both because it is a native skill, and because it is one of the fundamental forms of learning: trial and error. The catalyst for this is questioning. James’s mission for us all, “Spin your own fate.”

Later in life, he appears less sanguine about education and leaves us with this still relevant observation. “Compared to what we ought to be, we are half awake.” And “Man lives in only one small room of the enormous house of his consciousness.”

Good teachers can make us all sculptors of our own minds, shapers of our streams of consciousness. Teachers of all kinds can guide us as we explore all the other rooms in our house. And all it takes is curiosity, which children have in abundance, and questions are the sound our mind’s make when we are curious.

“Finally, a program that provides an elegant solution to utilize what we know about learning and the teaching and learning process.” Stephen B. Graves, PhD, Professor of Education, University of South Florida

The Terego Ideation Method™ is designed to ensure that children will think things through thoroughly, before making decisions.

Still waiting to try my ideation method and unleash your children’s potential? Watch this this video. The topic being examined happens to be “Why Does Math Matter?” But the subject could be anything, the method still works across all subjects and all ages.